The History of SPX

Home | About Us | The History of SPX

The History of SPX

In 1955, St. Pius X Catholic School was founded with modest beginnings - only five classrooms and a cafeteria. Led by The Sisters of the Holy Ghost and Mary Immaculate, they enlisted dedicated lay teachers as their co-workers in the classroom. Sister Mary Fintan was named the first principal, a post she would hold until May of 1959.

During the 1960s, St. Pius X became the first parish in the Diocese to exceed its goal in the Diocesan Educational Fund Campaign. Parish contributions helped in the building of both Bishop Lynch High School and Bishop Dunne High School. Our own school also began to grow, with the completion of a stand-alone building that housed six classrooms, two offices, and two bathrooms. In 1969, Sister Gabriel Hession was appointed to the role of principal of St. Pius X, a position she would maintain until 1985!

During the 1980s, St. Pius X continued to expand, with the brick and mortar addition of the Parish Center, which included a regulation-sized gym with seating for 700, two locker rooms, a two-story foyer, five meeting rooms as well as a kitchen. By the mid-1980s, the time had arrived for the good sisters to turn over the administration of St. Pius X School to the parish, now that the school had become self-sustaining. Linda Clervi was named our school’s first lay principal.

The 1990s saw the school grow further, with the completion of the Library and Media Center. This space houses computers, our school library, and a video production center to serve the whole community.

In the early 2000s, the completion of Communion Hall on campus provided our school with new facilities for the teachers, as well as a state-of-the-art cafeteria. 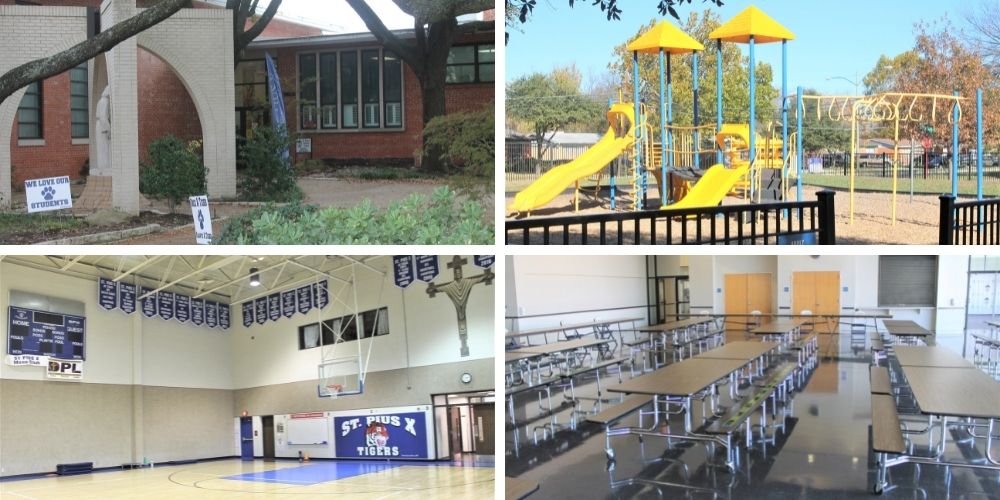 A tradition at St. Pius X has always been a strong commitment to Catholic education. St. Pius X parishioners and the parish have supported Bishop Lynch High School from the inception through both manual and financial support. The football stadium and baseball field are both named for St. Pius X families - Roffino Stadium and McIngvale Field.

Today, our goal is to ensure Academic Excellence and Catholic Identity through initiatives taken by the entire school staff. We are committed to Academic Excellence by offering proven academics such as prep classes for test-taking skills, ISEE prep class for 8th graders, new textbooks, and technology in classrooms. We have developed a committed administrative team covering curriculum, technology, counseling, and support.

We welcome you all to stop by and say hello.